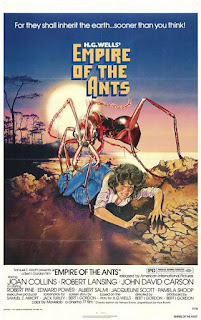 Empire of the Ants (1977) Back in the late seventies, every possible animal was being tapped as a potential movie villain, thanks to the success of Jaws. In 1977, Hollywood producers must have thought the next hot ticket would be ants. Two movies featuring killer ants were released that year, and one of them, It Happened At Lakewood Manor (also known as Ants) was a made-for-TV feature, and is one of the most god-awful films I have ever seen (for more on that, check out C.C.C. Issue 15).

I held out hope that the other killer ant film from that year—Empire of the Ants, which is based on a story by legendary sci-fi writer H.G Wells and directed by the guy behind The Food of the Gods—would be more in-line with one of the greatest killer insect films ever, 1957’s Them! As it turns out, Empire of the Ants has more in common with Them! as far as content goes. As far as quality, it’s in a whole other league.

The film opens with a voice-over and close up stock footage of ants going about their business.

The tour hits a speed bump when giant, vicious ants attack the group. Their boat gets destroyed, everyone becomes stranded, and the ants herd the escaping humans to their doom.

It’s painfully obvious the ants were filmed from behind glass—at one point, an ant climbs onto the sky.

The actors take the whole film very seriously, which severely clashes with the sub-par visual effects. Their responses to the ants come off as funny more than genuine.  However, the acting in the scenes with just humans present is passable, especially considering some of the cheesy dialogue. ดูหนังออนไลน์